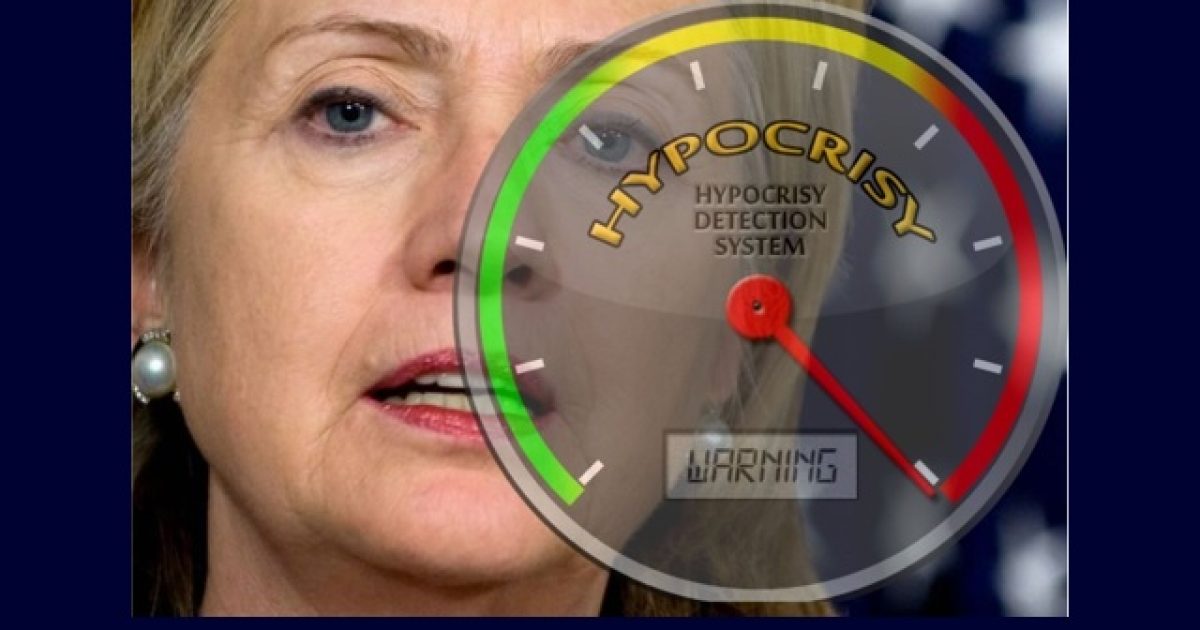 It’s become redundant to mention that the Hillary Clinton presidential campaign is in triage, as “the Hillary Clinton campaign” will do to set the narrative. Her email server scandal combined with the widely-held perception that she lies about almost everything has caused her support to plummet.

Not one to go quietly into that good night, Madam Secretary is throwing a Hail Mary pass to resuscitate her campaign, and it may win a medal for the most cynical, hypocritical thing you’ve ever seen in politics. {Note: there is a lot of competition for that award.}

One of the demographic groups the Clinton campaign has been counting on–women–have been abandoning her in droves according to current polls.

Perhaps this is why, at a recent press conference in Cedar Falls, Iowa, Hillary doubled down on framing herself as the only hope for women living in this despicable country of rape, sexual harassment and general unfairness.

Apparently the campaign is targeting millennial women who are too young to know Hillary’s past, or are so indoctrinated in the leftist orthodoxy that they won’t care. If the women of America need a champion to stand up for them against the crime of sexual assault, I can think of no worse person for that role than one Hillary Diane Rodham Clinton.

A quick review of history is in order.

During the 1992 presidential campaign and the Bill Clinton administration, a conga line of women came forward accusing Hillary’s husband of inappropriate sexual relationships, unsolicited sexual advances and even rape. Instead of granting those women the “right to be believed,” Hillary and the other operatives of the Clinton political machine sought to destroy those women through character assassination and any other means available to them. It happened so frequently the campaign commonly referred to it as “bimbo eruptions.” Instead of being a champion for women, Hillary did what was politically expedient for her own fortunes. The victims of her husband were left to twist in the wind.

If Hillary is so concerned that women’s voices are heard as relates to sexual assault, she may want to talk to the left-leaning Rolling Stone magazine and liberal Hollywood favorite Lena Dunham. It was Rolling Stone, you may recall, that ran with a story about a University of Virginia co-ed who claimed to be raped. After the poorly-sourced article was published, it was later determined that the woman’s claim was without merit. Similarly, Dunham made the claim in her book that she was raped by a man she identified as a campus Republican (how convenient!) while a student at Oberlin. Scrutiny of the facts by reporters quickly determined that her story didn’t hold water.

By pushing false rape accusations to advance a politically-motivated narrative, it is the forces of the left who are making it much more difficult for women who have legitimately suffered from sexual assault to be believed. Like all of her other meticulously calculated and focus-group tested campaign themes, Hillary’s latest grab for women comes off phony and hypocritical.

The liberal pundit class has taken to blaming Hillary’s missteps on her advisers.

“Let Hillary be Hillary!” they proclaim.

That is precisely the problem. This is the real Hillary, and it’s someone an increasing number of Americans want nothing to do with.