What we see today is nothing more than trea$on for profit.

A few short weeks ago, there was a high degree of social shaming as people stockpiled supplies on the eve of social distancing, on orders from many state and local leaders. Little did anyone know that many of these same leaders were doing their share of hoarding.

President Trump soon afterwards declared the hoarding of medical supplies would be both illegal and subject to Department of Justice prosecution. Not long after, the SEIU located 39 million N95 masks. And they started connecting their supplier to hospitals and state and local governments.  The masks are now distributed in California and New York at a cost of $5 each.

When it comes to providing medical masks, 3M’s CEO claimed “demand was exceeding production.”  However, that is not what a Florida official told Tucker Carlson:

The head of Florida’s Division of Emergency Management accused U.S. mask manufacturer 3M of shipping the critical protective equipment to foreign countries who outbid U.S. buyers — even as hospitals and state officials desperately scramble to secure N95 protective masks for healthcare workers on the frontlines of the coronavirus pandemic.

“For the last several weeks, we have had a boiler room chasing down 3M authorized distributors [and] brokers representing that they sell the N95 masks, only get to warehouses that are completely empty,” Jared Moskowitz said. “[We are] being told that our shipments are on cargo planes and the flights don’t even appear. We are chasing ghosts. I just decided to turn up the heat and tell people what is actually happening in the N95 mask space.”

” The idea that an American company is selling masks away from our hospitals…doctors…the real heroes on the front lines is… really criminal.”

More of the Same:

In normal times, an N95 face mask would cost a big corporation a buck or less — particularly if it ordered a million of them.

But these aren’t normal times. And the pitch from industrial supplier Hatfield and Co. to sell as many as 2 million masks to a major U.S. oil company last week wasn’t your typical offer. The Texas-based supplier wanted $6.3 million for a minimum order of 1 million masks, with an option of buying 2 million for nearly $13 million, sales documents and interviews indicate. 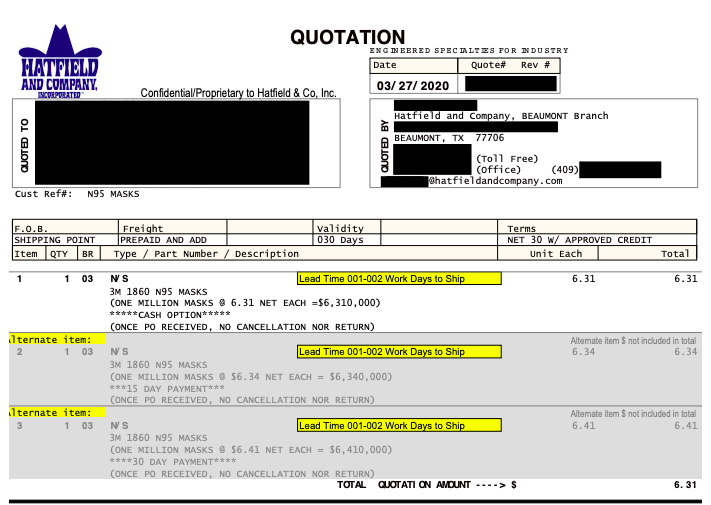 At a time when the new coronavirus is rapidly spreading across the country and health care professionals are desperate for these face masks — which filter out at least 95% of airborne particles — to protect sick people and themselves, critics say a price like that smacks of profiteering and price gouging by someone in the supply chain.

Hatfield and Co. said it did not mark up the product excessively or engage in price gouging, telling The Texas Tribune that its own supplier set the “terms and conditions” for the sale. The company declined to identify the supplier or quantify how much it stood to profit, citing its contractual agreements.

Are You Really The One Running Things?

There’s another shocking series of revelations. It’s come to light that a couple of key governors were being disingenuous about the roots of their supply needs. Thus, they are now putting extraneous burdens on the federal government. The list of offenders isn’t surprising.

As California scrambles to fend off a potential coronavirus hot zone akin to New York and Italy, 25% of its public health labs were shutdown over the last decade.

In the two decades leading up to the COVID-19 outbreak, 11 of California’s public health labs designed for the focused testing Newsom wants closed their doors.

California now relies on 29 county and city public health labs, along with the California State Laboratory in Richmond. Together they serve 40 million people.

It’s around “the same number we had in 1950,” said Kat DeBurgh, executive director of the Health Officers Association of California, “when the population was a little more than 10 million.”

Public health laboratories don’t have the resources to run thousands of tests a day like the privately run labs recently brought on line for coronavirus testing, but they have expertise for close surveillance and testing of potential disease outbreaks.

That kind of information could have provided the Newsom administration with a fuller picture of where coronavirus clusters would emerge, said Rick Greenwood, an epidemiology and environmental health sciences adjunct professor at UCLA.

Then there is quasi-presidential wannabe Andrew Cuomo.

The New York governor was deriding the federal government for more ventilators, but he is already in possession of 30,000 ventilators that he is NOT using!

Governor Cuomo’s answer was found in the New York Post:

“All the predictions say you could have an apex needing 140,000 beds and about 40,000 ventilators.” Cuomo said at a press briefing Friday at Manhattan’s Javits Center. The state’s predictions come from Weill Cornell Medicine, the CDC and the consulting firm McKinsey and Company.

“Somebody said, one of the cable news shows, the ventilators that New York needed aren’t even being deployed. They’re in a stockpile,” Cuomo said.

“Yes they’re in a stockpile because that’s where they’re supposed to be because we don’t need them yet. We need them for the apex. The apex isn’t here. So we’re gathering them in the stockpile so when we need them they will be there,” Cuomo said.

Earlier he predicted the apex, or the peak of the state’s coronavirus cases, could come in 21 days.

“We don’t need them today. Because we’re not at capacity today,” Cuomo said.

If you don’t need them today, why ask now?

It’s like waiting for your neighbor’s water hose when you house is on fire. It’s moronic considering you have a perfectly good hose sitting in wait. After reviewing these facts, no one in their right mind would blame the Trump Administration for these shortfalls!

After Pearl Harbor and 9/11, we looked at what went wrong to learn from our mistakes.

Once we've recovered, we need a nonpartisan commission to review our response and how we can better prepare for the next pandemic.

I’m working on a bill to do that.https://t.co/uqO3BwVldN