Go woke, go broke. That’s what many Leftist-run businesses are finding out these days. Most recently we learned of Bed Bath & Beyond’s financial troubles.

The company announced the closing of 150 retail stores and a layoff of 20 percent of its staff. I chronicled the fall of companies like Bed Bath & Beyond on my radio show. Woke is last years’ fashion.

So how could things get any worse for Bed Bath & Beyond? We now learn that the Chief Financial Officer for the retailer apparently committed suicide.

According to The Daily Mail, BB&B CFO Gustavo Arnal, 52, leaped from the “Jenga Tower”, a building at the corner near 56 Leonard Street and Church Street on Friday. Witnesses recall seeing the body of a man as it hit the ground having fallen 18 stories.

Later, New York City’s EMS officials were seen carrying the body from the scene in the typical black body bag. On Sunday, the coroner identified the man as Gustavo Arnal.

Did Arnal feel responsible for the woke woes of Bed Bath & Beyond? He certainly comes from a good pedigree, having worked at Avon, Walgreen’s, and Proctor and Gamble. He joined Bed Bath & Beyond as the organization’s CFO in 2020. And needless to say, 2020 was a difficult year for any retailer.

The country locked down in April, which certainly didn’t help most retailers; save Walmart and Costco. And of course, post-coup the Biden economy put pressures on retailers that would cause many people to contemplate ending it all.

Below is the 5-year chart for the company. Clearly one can see the downward trend from April 2020 to the present: 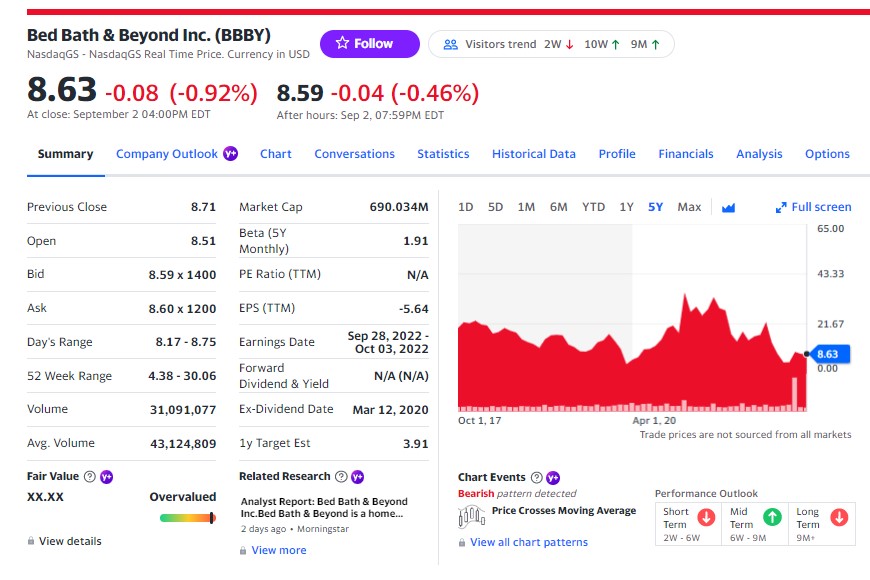 The stock dropped from $30+ to under $10 the year Arnal joined the company. Also, their EPS: earnings per share is $-5.64. That’s a negative number. A big negative number.

Ironically, Jan of 2021 is when the stock peaked. But that was the last day of wine and roses.

Bed Bath & Beyond caused much of their own demise, as they entered politics by terminating their agreement with Mike Lindell. In the month when the stock peaked, actually growing during COVID lockdown, the company did the unthinkable. It alienated well over half its market.

While the company claims they didn’t terminate Lindell for political reasons, the timing of the deal raised questions. And conservative consumers revolted, sending the stock into a downward slide over the next few months. Instead of innovating the company, perhaps looking at the Amazon model, Bed Bath & Beyond continued their “woke” policies.

Regardless of why they made the move to cancel MyPillow, Lindell certainly is getting the last laugh on the new developments for the struggling retailer.

According to MarketBeat.com, Arnal sold over 42,000 shares in the company two weeks ago. The value of his sale raised just over $1 million; a third of what it should have been.

As it turns out, at the time of his death Arnal still owned 267,896 shares in the company. Present market value is roughly $6.5million.

The question begs, “Why liquidate $1 million in stocks then jump to your death?”

Admittedly, life under Biden (and Leftism in general) is far more expensive. So much so that $1 million no longer impresses anybody. But why did Arnal liquidate? Are more troubles ahead for the company? And who else will take the tragic way out of their woke world?