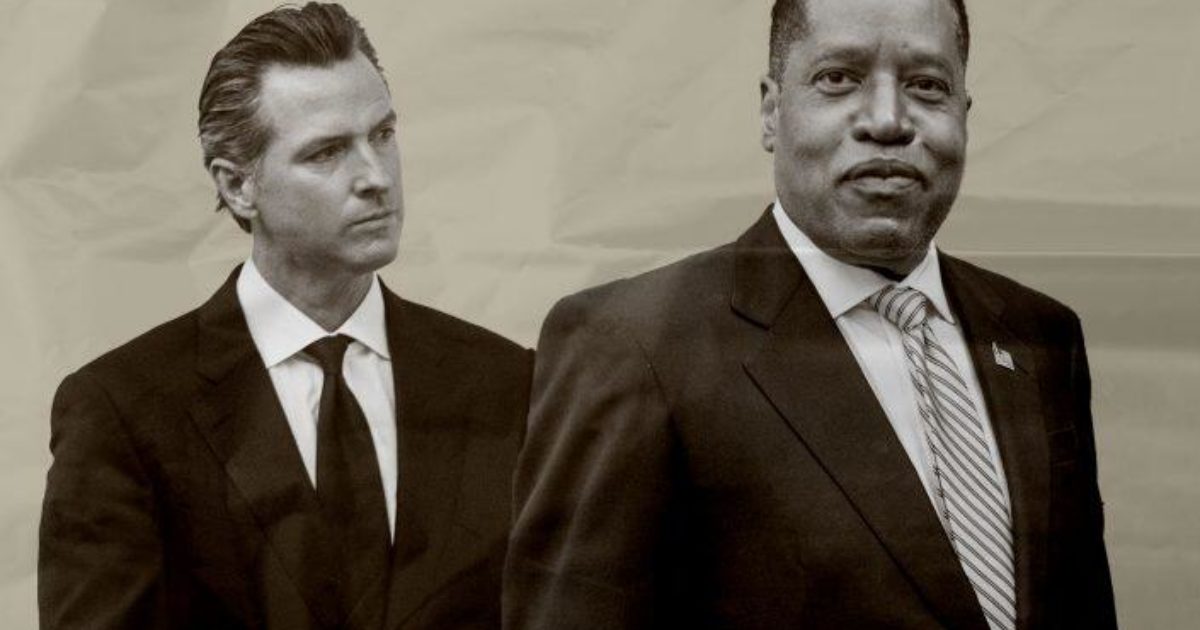 Only in the liberal paradise of California can a white Bay Area male elitist, who grew up in the epitome of privilege; attack a minority man of color, who grew up in Crenshaw in such heinous manners.

This was far from being the only incident. Soon after, during a trip through the once popular beachside community Venice, this same black man was assaulted by a person wearing a gorilla mask!

The conservative talk show host arrived in Venice around 11:50 a.m. A crowd gathered as he walked along the street toward a scheduled tour of a homeless encampment on Third Avenue.

As he was walking, a woman on a bicycle was captured on video throwing an egg toward Elder, although it did not appear to hit anyone.

A man believed to be a member of Elder’s staff approached the masked woman, who screamed in response. At least one other spectator got in the man’s face and hurled expletives at him.

Elder was rushed into a nearby SUV and driven away from the scene.

So where was BLM since this happened? Is not this black-vs-white brouhaha custom-made them?  Where is AOC’s Squad? Why is Jesse Jackson quiet? Surely Al Sharpton is on his way to Southern California to condemn Governor Newsom’s rhetoric?

Los Angeles Public Radio answers these questions in their sounding of the alarm to stand up against this strong African American candidate on the political rise.

Elder would be the first Black governor in state history, and he’s making a play for voters of color — while Black leaders line up to oppose him.

But many of California’s African American leaders say, not so fast.  In an interview, Representative Karen Bass said Elder’s promise to rescind public health restrictions would put lives at risk.

But for a few Black voters, the Democratic party’s dominant grip on power is a reason to open the door to a Republican-led recall.

Secondly, how could the national media remains deafly silent on this incident? Answer is, they were not. They took the side of the white elitist in opposing a black man who rose from rags-to-riches by tearing at who he was: A Black Conservative Republican!

In today’s LA Times.
You’ve got to be real scared and desperate to play the race card against the brother from South Central. pic.twitter.com/pqZIujKxPD

Few things infuriate me more than watching a Black person use willful blindness and cherry-picked facts to make overly simplistic arguments that whitewash the complex problems that come along with being Black in America.

And throughout his career — as a radio host, as a talking head for Fox News and now as a gubernatorial candidate — Elder has made a point of doing just that, usually with a lot of taunting and toddler-like name-calling of his ideological enemies in the process.

It’s not just that Elder would be a Trump fanboy Republican trying to run a state dominated by Democrats. Or that he has zero experience in elected office and clearly doesn’t have the temperament for governance. (He can’t even take questions from journalists without losing his cool.)

Elder mocks critical race theory, though I’m not sure he understands what it actually is. That doesn’t bode well for ethnic studies in California.

Like a lot of Black people, though, I’ve learned that it’s often best just to ignore people like Elder. People who are — as my dad used to say — “skinfolk” but not necessarily kinfolk.

TRANSLATION:  Because Larry Elder does not tote the Democrat liberal agenda, he is therefore an Uncle Tom.

The California Globe retorted this assault on Elder:

The media is giving him the “racist white-Republican” treatment despite that Elder, for nearly 30 years on his radio show, has spoken daily of self-empowerment and individualism, and rejected the victim narrative of black America.

This treatment by the media is usually reserved for middle-aged white Republicans, which means that Elder is a real threat to Democrat politics in California.

The California media has called Elder “racist.” They have called him “sexist” and “misogynistic.” He’s been accused of “lacking any moral authority.”

He’s been compared to David Duke by a longtime journalist and LA Times opinion columnist.

How ironic given that Larry Elder wrote and produced the movie “Uncle Tom,” which “examines self-empowerment, individualism and rejecting the victim narrative. Uncle Tom shows us a different perspective of American History from this often ignored and ridiculed group” of Conservative black Americans.

How is the blue-blood scion of San Francisco politics and wealth able to stand in polar opposite of everything the Democrat Party has been preaching they are against for the last half-century? Because a kind of inert hypocrisy is the core of Bay Area psyche:

City Journal took a look at this societal double-standard:

The possibility that Larry Elder may win California’s recall election against Governor Gavin Newsom is generating acute anxiety in the mainstream media and among the activist Left. Elder’s foes are responding with their favored means of destruction: by playing the race card.

The media have focused particularly on Elder’s views about crime and policing. The self-described “Sage from South-Central” maintains that criminals, not the police, are the biggest threat in the black community. According to Elder, the false narrative about lethal police racism has only led to more black homicide deaths. “When you reduce the possibility of a bad guy getting caught, getting convicted and getting incarcerated, guess what? Crime goes up,” he said recently at a campaign event in Orange County.

Elder also rejects the charge that white civilians are gunning down blacks, as LeBron James maintained in a tweet during the George Floyd riots

Such statements are anathema to the establishment Left, deeply invested as it is in the idea that blacks have little agency in the face of ubiquitous white racism. Few subjects are more taboo in elite discourse than the elevated rate of crime among blacks, as it suggests cultural pathologies that—at the very least—complicate the victim narrative. To the Left, black crime is little more than a racist fiction.

It is so surreal, one can hear Kevin Costner’s ‘Through the Looking Glass’ monologue from the movie JFK:

“We’re through the looking glass here.  Here white is black and black is white.”

If the muck that Elder was dragged through was not bad enough, Newsom and Company displayed their duplicity once again. But this time the story would be wrapped up in ‘sex’, ‘drugs’, and ‘firearms’. The allegations were sordid enough for a supermarket tabloid, vice national news. 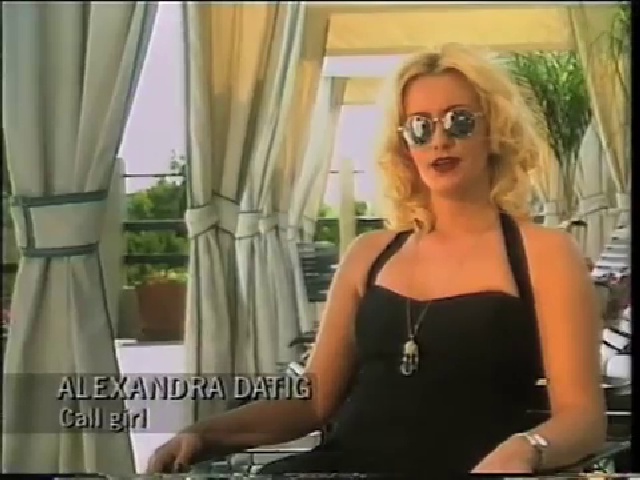 She broke off an 18-month engagement with the conservative talk show host in 2015 after he waved a gun at her while high on marijuana.

Datig portrayed him as a marijuana user who would often become threatening or insistent with her, including in his repeated demands that she get a “Larry’s Girl” tattoo to show her devotion to him.

Elder’s attitude toward women has been a major issue in the campaign, with both Newsom and GOP rivals flagging a two-decade-old column in which he wrote, “Women know less than men about political issues, economics, and current events.”

Datig said she first met Elder, who is now 69, at a party at the Playboy Mansion in the early 2000s, though their relationship did not begin until long after. The two became engaged in 2013 before Datig broke off the relationship in 2015, fearing for her safety. She said he pressured her to sign a non-disclosure agreement after being informed by Elder’s assistant that “all Larry’s girlfriends did,’’ she said, in an interview with POLITICO. She complied, saying she was “terrified … and I ran for my life.’’

Except Datig has a scandalous past herself.

She was a one-time $10,000/night call-girl in the employ of none other than Heidi Fleiss.  Infact it was Datig who blew the whistle, leading to one of Hollywood’s biggest sex scandals.

Datig said the tempting lifestyle — “I was paid $10,000 a day, plus jewelry, plus first-class plane tickets” — came with a heavy price.

Datig said most of the girls worked when they wanted to work, but they had to follow Fleiss’ rules.

After less than a year, Datig wanted out. She saved enough money to pursue an acting and modeling career.

Asked when she decided to bring Fleiss down, Datig said, “When she started to become obsessed with becoming a notorious public figure as a pimp.”

By then, a task force had started an investigation into Fleiss. Datig became the key informant.

In 1993, authorities conducted a sting at the Beverly Hilton that would bring down the madam and her ring.

In the following years, Fleiss was convicted of pandering, tax evasion and money laundering. She got three years in prison.

Twenty years later, Datig has turned her life around.

She doesn’t want to be known as a former prostitute, but a human trafficking survivor.

That has not stopped Datig from seeking to profit on her past notoriety. Datig once took part in the BBC documentary “A Death In Hollywood” about her ‘relationship’ with the late-movie producer Don Simpson. Datig also wrote a steamy ‘tell-all’ book under her previous-pseudonym ‘Tiffany’.

It seems the American people have had enough, these stories have saturated and just don’t grab the headlines like they used to.

Elder was kicked off the Recall ballot earlier in the Summer by the California Secretary of State, only to be later put back on the ballot.

Elder was not the only black conservative candidate to be mistreated by the California political establishment during the 2021 Recall race. Small-business entrepreneur and philanthropist Major Williams was left off the final candidate list.

What happened? And why? The candidate personally explained the situation:

It was one thing to be able to whitewash one African-American conservative, but it would have been much more difficult for Democrat operatives to upend two candidates. It might have forced many in the national media to pay attention, and lead to possible cries of “RACISM!”

But sadly, no one ever expected the Republican establishment to stand up and fight back in defense of either Elder or Williams.